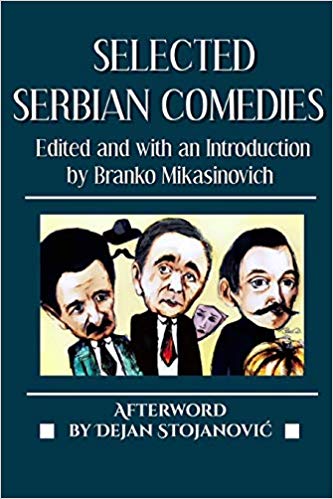 The latest compilation from the scholar and anthologist Branko Mikasinovich brings together nine plays by three Serbian playwrights. The selection builds upon Mikasinovich’s earlier pioneering anthologies of South Slav drama, Five Modern Yugoslav Plays (1977) and Selected Serbian Plays (2016). The editor seems to have been driven by what Ondřej Vimr defined as supply-driven translation: the plays have been rendered into English purely for the sake of their being available to English-reading audiences rather than meeting an existing demand in those audiences. Yet, dispatching a play (or plays) originally written in a ‘small’ language into a vast, largely self-centred publishing market is similar to sending a man or—more in keeping with the comic nature of the subject—a dog into space. Regardless of the editor’s explicit goal, there is necessarily a broader context within which such a mission can make sense: why exactly have those plays been selected and what are they going to do there? In other words, what is seen as comic in a given source culture at a given point in time and how is this quality conveyed in another time and another, target culture?

A remarkably ambitious endeavor, Mikasinovich’s anthology goes some way towards addressing these questions. The editor’s selection frames three playwrights from three very different epoques and cultural milieus: the Serb from the then Habsburg province of Vojvodina Jovan Popović Sterija (1806-1856), the Aromanian-born Branislav Nušić (1864-1938), and Dušan Kovačević from the plebeian Western Serbia (b. 1948). Likewise, the plays selected cover a wide range of comic plots: from a group of sycophants, caught in the whirlwind of the revolution of 1848, who support the Serbian or the Hungarian cause as the wind blows (Sterija’s Patriots [Rodoljupci, 1849-1853]), to a veritable menagerie of petty-bourgeois careerists, matchmakers and home-wreckers in the Serbian and, later, Yugoslav kingdom (Nušić’s Suspicious Character [Sumnjivo lice, 1887], Mrs Minister [Gospođa ministarka, 1928], and PhD [Dr, 1936]), to the allegorical representations of mentality patterns tinged with graveyard humor and absurd (Kovačević’s The Marathon Family [Maratonci trče počasni krug, 1972], The Gathering Place [Sabirni centar, 1982], Larry Thompson, the Tragedy of a Youth [Lari Tompson, tragedija jedne mladosti, 1996], Kumovi: (A Comic Look at an Everyday Tragedy) [Kumovi, 2013], Hypnotized by Love [Hipnoza jedne ljubavi, 2016]). The common thread in all these comedies, regardless of their time of composition or their particular plot, is Serbia’s precipitous, never accomplished transition from a staunchly patriarchal society, driven by bonds of family kinship and the sacrificial myth of Kosovo, to a modern nation-state, marked competitive entrepreneurship, where success is reserved for individuals.

Mikasinovich’s belief that his selection “embodies the best that Serbian comedy can offer” begs some questions. While it is difficult not to agree that the trio should indeed be included in any translation canon of Serbian drama it seems unjust to exclude Aleksandar Popović (1929-1996), whose play The Revolutionary Road of Bora the Tailor [1967] was voted the best Serbian play in the second half of the twentieth century. Another peculiarity of Mikasinovich’s selection is the conspicuously uneven balance in space, i.e. the number of plays, accorded to each of the three playwrights: Sterija’s work is represented by a single play, in Nušić this figure rises to three and in Kovačević it peaks at five plays. Unless further explanations and qualifications are made—and Mikasinovich does not make them—this ratio may well take on axiological connotations and indicate an aesthetic progress from Sterija to Nušić to Kovačević. In the existing scholarship and criticism there is no prevalent view, let alone a consensus, about this kind of teleology. Interestingly enough, a similar uneven balance affects the work of Kovačević himself: his most renowned plays, from the first part of his career (1970s and 1980s) give way to his later plays (2010s).

One can speculate that part of the reason for this disequilibrium is that Mikasinovich’s earlier theatrical anthologies were structured on a more balanced ratio whereby each playwright is represented by a single play and which also feature a larger selection of writers (including Aleksandar Popović). It is possible that after these more rigorously structured anthologies the editor wanted to go for something broader and bent on a more recent period. In any event, in this latest anthology there is a tension between the canonizing approach of the anthologist and the disseminating work of the translator.

The plays of Sterija, Nušić and Kovačević have been rendered into English by four translators―two of them drama practitioners―who applied a variety of translating strategies, including domestication, foreignization, and a mixture of both (Venuti). Any translator of Serbian plays will face a series of formidable challenges which arise from different grammatical, semantic, and cultural patterns in Serbian and English. To begin with, there is a mismatch between many fundamental grammatical categories: for instance, perfective and imperfective verbs in Serbian have to be rendered by very different, indirect means in English. Furthermore, the elaborate Serbian system of kinship terms, reaching out to very distant cousins and long deceased ancestors, has no equivalent in English. Finally, the political cultures in the South Slav and the Anglo-Saxon lands have developed in different ways which means that Serbian- and English-speaking audiences will often see the same event as comic but in different ways.

In addition to these general difficulties, the three playwrights in Mikasinovich’s anthology present obstacles specific to their own poetics. The language of Sterija is an irregular, macaronic medley of Hungarian, German and Serbian, the latter with a significant input of Russian. Nušić, for his part, relishes in smalltown chatter, a peculiarly contrived mixture of feigned sighs, preposterous threats, and angry outbursts. Kovačević’s characters regularly complement their points with an impressive gamut of curses and swear words which involve anything and everything from family, to flora and fauna, to planets, creating a peculiar microcosm of blasphemy. None of these theatrical idioms is easy to render in English and the translators often had to make creative choices which influenced the semantic as well as performative aspects of the play.

In Sterija’s Patriots, for instance, the principal source of comedy is the tension between the hypocrisy of nationalist turncoats and the realism of true, unassuming patriots. Whereas the ever-shifting political loyalties of the earlier are reflected in a peculiarly convoluted mixture of the baseline Serbian with Hungarian and German, both provided in Serbian transliteration but without translation, the latter speak frankly and unostentatiously in the Serbian language spoken by the common folk at that time. In Jelena Ilić’s translation of the play, this tension between the artificial and the natural has been displaced: the main opposition is between the different language sequences whereby the baseline is English (for Serbian) and Hungarian and German provide a contrast. These code-switching sequences are provided in the original orthography (Hungarian, German) rather than in transliteration, with each non-English sentence translated in a footnote.

In Nušić’s play Mrs. Minister, the main comic contrast is between vulgarity and pretense: a narrow-minded, middle-class housewife turns into a Serbian, and distinctly comic, Lady Macbeth when her husband unexpectedly becomes a government minister. In G. N. W. Locke’s English translation, the fragmented, platitudinous speech of Nušić’s characters, which follows the breathless rhythm of the protagonist’s rise and fall, gets a more complex syntactic structure and hence longer sentences. Nušić mixture of rusticity and pompousness is consolidated into the smooth jargon of the late Victorian era and thereby provided with a certain class dignity. The consequence of this syntactic and stylistic evening out is that the play becomes inherently more rational and also more familiar to English-speaking audiences but at the same time more difficult to stage because of the length of the play in translation and the homogeneity of its style.

The most prolific source of comic effects in Kovačević’s play The Marathon Family is the proximity of, and tension between, death and obscenity: a hilariously discordant, exclusively male family of undertakers bury the dead but also procreate in both deed (through fornication with opposite sex) and word (by swearing at each other). In Miloš Mladenović’s translation, Kovačević’s staccato of brusque, sardonic sentences is conveyed by equally fragmented sentences in English and the Serbian swear-words and curses are domesticated by nearest equivalents in English. This strategy makes Kovačević grotesque vision of the declining patriarchate eminently stageable in English translation. Another play by Kovačević, The Gathering Place, develops a different kind of interplay of death and love: undertakers retreat and the dead step in, mourning their loved ones who are still alive much more than the latter are mourned by them. Unlike Mladenović’s rendition of The Marathon Family, Denis Barnett’s translation of the play smooths out the dialectal and personal differences in the speech of different characters and fuses them into a danse macabre which will steer the director towards a melancholy rather than comic tone on the stage.

On the technical side, the editorial apparatus occasionally leaves something to be desired. To be sure, the pronunciation guide to Serbian names is useful as are occasional explanatory footnotes in the main body of the text. However, the background information, introduced through a brief introduction at the beginning, three pithy biographical paragraphs ahead of each of the three playwrights’ sections, and an afterword at the end of the volume, is simply not enough for an English reader to contextualize the plays in the source culture. Also, by failing to provide even the basic stage and translation history of the nine plays, Mikasinovich also misses a good opportunity to make a case for their relevance in theatrical context of the target culture. In the present era of the global austerity, the populist assault on democracy and the jingoist rhetoric of the sundry nationalists, which produced Brexit, the Trump family, and the anti-immigrant campaign, the political verve of such plays as Sterija’s The Patriots, Nušić’s Mrs Minister and Kovačević’s Kumovi (A Comic Look on everyday Reality) should be obvious.

For this reason, the Serbian comedies in English translation will not end up as a hapless dog dispatched into a wide and indifferent space. Although scholars will probably need to peruse other sources for more details, Mikasinovich’s book will be of great interest to general readership as the most significant primary resource on Serbian comedy in English translation and it will also stimulate theatre professionals by the scope and intensity of satire.

Vladimir Zorić is an Associate Professor in Slavonic Studies at the University of Nottingham. His research interests include the tropology of exile in law, literature, and the humanities, and, recently, the construction of the Habsburg Monarchy and Central Europe in South Slavic literatures. He is the author of Kiš, legenda i priča (Kiš, Legend and Narrative, 2005) and The Rhetoric of Exile: Duress and the Imagining of Force (2016).